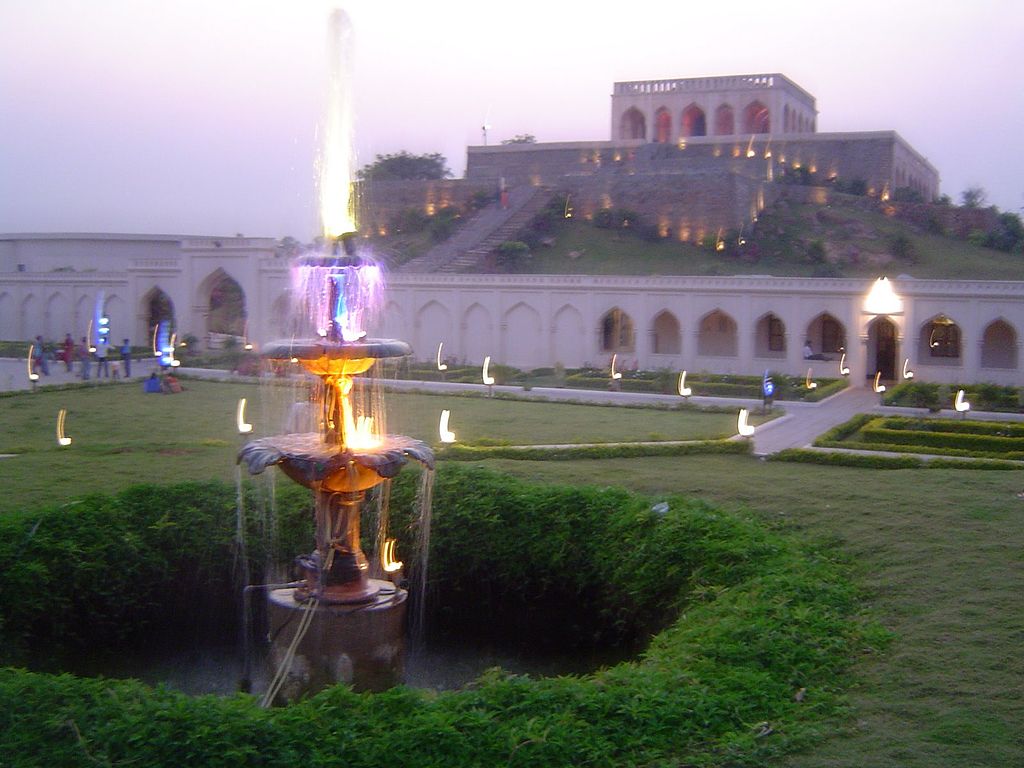 A romantic man once said ‘Some love stories have no words. Only heartbeats.’ In the case of the tales of romance, some love stories have been immortalized in brick and mortar. It’s fascinating to see how some people have toiled for the sake of love and created masterpieces that live and breathe their romance even hundreds of years after they were conceived.

In India, we find the majestic Taj Mahal in Agra, the symbol of love of a Mughal ruler Shah Jahan for his wife Mumtaz Mahal while at another spot in the country, in Hyderabad, we find another astounding architectural wonder, Taramati Baradari, which sings ballads of legendary love. 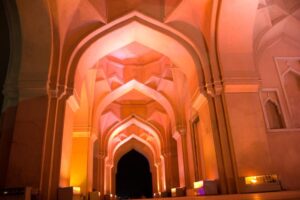 Taramati Baradari, a Persian-style wonderful edifice erected on the banks of the river Musi (Muchukunda) in Hyderabad, is regarded as one of the greatest pieces created by Ibrahim Quli Qutub Shah, the Qutub Shah Dynasty’s fourthsultan.

Baradari, also Bara Dari, is a building or pavilion with twelve doors designed to allow free flow of air. It is mostly recognised for its acoustics in the middle of the gorgeous and artistic ambience of the Ibrahim Bagh, and it is primarily associated with romantic tales of a prince falling in love.

Why was Taramati Baradari built?

Kings who fell in love with people who were not royal family members always found a place in history, and if it was with a courtesan, it was filled with numerous fables. Medieval history is replete with various buildings and constructions that are closely related to these types of love episodes, which stand tall to this day and pique the interest of visitors who want to learn more. There are numerous incomparable histories of Hyderabad’s past, and this specific construction of Taramati Baradari is no exception

Ibrahim Bagh, a Persian-style park established during the time of Ibrahim Quli Qutub Shah, the second Sultan of Golconda, has a historical site known as “Taramati Baradari,” named for a courtesan. According to folklore, the emperor used to listen to Taramati’s melodies sung for travelers at the Sarai from his fort some distance away. Almost every day, he heard her lovely, calming voice brought to his fort by the soft breeze. The Emperor was captivated by her exquisite voice, which was both melodious and mesmerizing.

He was so taken by Tamarati’s singing that he built a palace where her melodic voice could be carried away by the air and reach the prince’s ear who was seated at the fort, a couple of kilometers away in Golconda Fort, without any disruption in the acoustical music. The Baradari was created with a specific acoustic construction that allowed the wind to transmit Taramati’s lovely voice to the Fort. Even a clap on the Baradari’s balcony could be heard in the Golkonda fort. Her voice was well complemented by the building’s and fort’s excellent acoustics.

Historians have related another fascinating story in which Taramati, along with her sister, Premamati, used to demonstrate her dance talents on tight ropes that connected her pavilion to the Golconda Fort’s pavilion. The sisters have also been said to have danced on moonlit nights on ropes connecting the Baradari to the Golconda fort.

According to folklore, Taramati continued to dance even after Emperor Aurangzeb ordered her to cease. The fact that these sisters were buried at the royal cemetery of the Quli Qutub Shahi Kings and Queens demonstrates the king’s love and respect for them.

The most common legend surrounding the fort is that of Taramati’s ghost. Many people claim to have seen Taramati performing at the Baradari, the royal courtroom’s dance stage. Some visitors, such as those described above, claim to have seen ownerless shadows gliding around. Many film crews that stayed beyond late hours have experienced similar incidents. Many publications have also reported the same thing, however, the veracity of such allegations remains questionable.

But, apart from the rumors and tell-tales, the Taramati Baradari is a symbol of grandeur. A visit to this place will instantly take you back in time, and leave you wondering how breathtaking the place would have been during its heydays!

The monument has a music hall with 12 entrances that also serves as an auditorium. Taramati Baradari is a hilltop structure with halls that expand into an art exhibition and a dining area. Its acoustics are regarded as excellent, which is why classical music and folk dance events are held here on a regular basis.

The Taramati Baradari pavilion features 12 doors and was built to provide cross-ventilation, which was one of the most primitive strategies employed at the time. The Telangana tourist agency has refurbished and enhanced the structure’s grandeur.

Presently, it is a cultural complex which is run by TSTDC where various events, concerts, performances and exhibitions are conducted. It is now used for performances on classical music and other folk art forms. Other amenities presently available at the open pavilion include an air-cooled theater with a seating capacity of 500, an open-air auditorium with a seating capacity of 1600, a Banquet Hall with a seating capacity of 250, a multi-cuisine restaurant, and a swimming pool. One can visit Taramati Baradari throughout the week. Taramati Baradari visiting hours is from 11 am to 6 pm. The entry to the complex is free. It’s one of the most stunning spots in Hyderabad that everyone should see. #HydTravel #hydnews