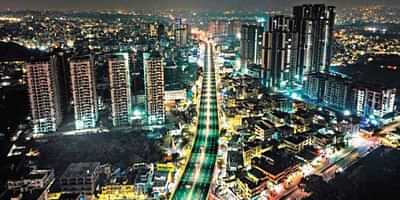 Hyderabad’s skyline looks stunning, with impressive towers and wide, traffic-free roads. But architects and urban planners say that the western part of the city doesn’t represent its people or culture. They elaborate on how the new infrastructure is diluting the city’s character.

There are a very few beautiful cities in the world and it’s their character that makes them stand out. But is Hyderabad losing its?

Aerial pictures of the city’s skyline have been circulating on social media after the inaugural of the Shaikpet flyover. These look stunning, with impressive high-rises and wide, traffic-free roads. The modern infrastructure along the IT Corridor corresponds with the people’s rich material lives and is an indicator of growth. We are proud of it, no doubt, but is it diluting the city’s character?

Urban planners and architects say that the western part of Hyderabad does not look like the city that represents its people or culture. The modern business infrastructure is formidable and imposing.
If you want to know how starkly disconnected the IT Corridor is from the rest of the city, take a stroll through Raheja Mindspace or Durgam Cheruvu or the Biodiversity Park road. You will find it hard to believe that this is part of Hyderabad. You will find yourself standing amidst soaring, crystal-clear, see-through glass towers — you are so close to the gilded world, yet so far.

“The cities we find beautiful are those which provide us with a sense of belonging. Hyderabad is porous and intrinsically accommodating — people love it the way it is. Hyderabad or any other aesthetically pleasing city is shaped over the years by its citizens, culture and economy.

Whereas, the IT Corridor is an exclusory city with rigid boundaries that cannot offer us a sense of belonging,” says Anant Maringanti, urban planner and executive director of Hyderabad Urban Lab.

Citing an example, Anant adds: “Have we ever wondered why there are tiny tea stalls and dosa bandis next to every corporate office or a housing tower? Why do people escape the luxurious buildings that offer all the amenities, including food and beverages like tea, for free? Nobody desires a place that cannot provide a sense of belonging.”

All world-class cities are supposed to have a signature infrastructure. It’s a particular kind of visual image that gives them distinctness. But many factors are taken into consideration before taking up an infrastructure project.

“All major cities have a committee, constituting intellectuals from different disciplines, that discusses major architectural projects. It discusses socio-economic factors, culture and citizens’ opinions before finalising the project. This is because architectural structures can impact us psychologically.

They can evoke good or bad feelings. We feel comfortable when it has a cultural connection to it. But, the buildings in Hyderabad are business-oriented and lack consideration for citizens. They make us feel intimidated and estranged,” actor and architect Kamal Kamaraju says.

“Sadly, this is not what a sensible architect would do. But, the market has tuned architects in such a way that they have no option but to build what they have been asked to build. There is barely any scope for artistic expression. As a result, the buildings lack character.

Most of the high-rises look alike. They all have the same concrete, similar coloured glass and cladding material. The builders only choose materials that are readily available and easy to use, because they are in a hurry to get the investment returns,” Kamal adds.

Winston Churchill had once said, “We shape our buildings; thereafter they shape us.” Architect G Shankar Narayan, who heads Shankar Narayan Architects, strongly believes in this.

“Architecture is an ever-evolving practice. It organically evolves with the needs and demands of society and culture. But sometimes, evolution or change is imposed to project the ideal image of the city imagined by those in authority. They project the vision for the future and think that they can attune people with it,” he says.

However, the western part of Hyderabad has seen planned, yet unnatural and rather aggressive growth, he says. “It has no consideration for culture or citizens’ needs. Although, it will, in the near future, represent the look of a typical global city with high-rises. But it will lack the essential elements such as parks at walkable distances and public squares seen in successful cities like Manhattan and New York.”

While one part of the City of Pearls is all sheen, Ananth believes that such strategy for infrastructure development would not work in India in the long run as it would only divide societies, culture and people. #KhabarLive #hydnews