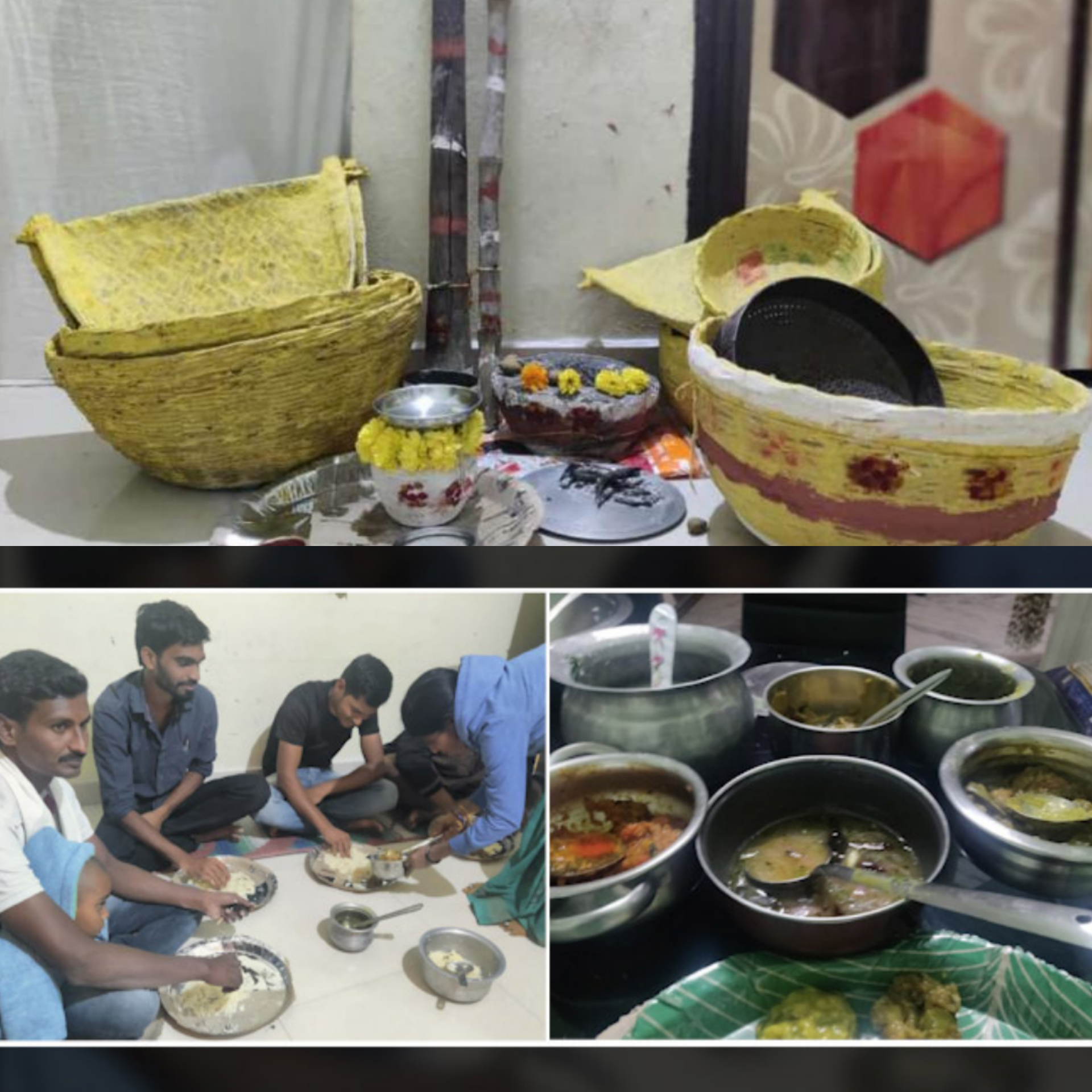 In erstwhile Nizamabad and Karimnagar districts in northern Telangana, the farmers, families and friends come together to share in the bounty of freshly yielded grains and celebrate the harvest that has been reaped called ‘Kotha Panduga’.

The end of each year in northern Telangana is marked by the paddy harvest coming in. The women from the farming communities cut the crop, which they had carefully sowed and watched over the entire season, and proceed to separate the grain from the husk. The men fill gunny sacks with this precious new grain and carry it home. A good harvest means celebration and giving thanks, and in the months of December and January, the farming communities in these areas celebrate Kotha Panduga, known as the festival of new grains.

In parts of Nizamabad, Kamareddy, erstwhile Adilabad and Karimnagar districts of Telangana, families and friends come together to share in the bounty of the freshly yielded grains and celebrate the harvest. “Kotha means new,” says Manchala Srikanth, a farmer from Lingapur village in Kamareddy district whose family celebrated Kotha Panduga in mid-December. “We have a meal cooked with the newly yielded rice after months of waiting for the harvest.”

But before eating, a ritual known as ‘Kotnam’ takes place where agricultural and household tools such as the rolu (stone grinder), rokali (masher), bamboo baskets, strainers and sieves are decorated with turmeric paste and limestone colour.

The women in the community are an integral part of the festivities and they conduct most of the rituals. These same women are the ones who are responsible for a major part of the cultivating and harvesting of the crop. After applying vermilion on their forehead, and turmeric to their cheeks and legs, the women take five fists of new rice to cook for the festive meal. Along with the rice, curries made with greens, brinjal, tomato, potato, pumpkin, and bottle gourd are served. There is also dal, chaaru (a thin gravy made with new raw tamarind) and curd. The meal is completed with a sweet, usually jaggery rice.

The feast is shared with friends and neighbours (commonly hailing from the same caste). Although sometimes different castes come together to partake of the meal, it isn’t the norm.

Manchala says, “After the Kotnam ritual is done, the daughters will be served the meal first, then neighbors and friends are invited to eat.”

Everything eaten is freshly made. The rice is newly harvested and even the vegetables used, for the most part, are cultivated in the farms. This is a predominantly vegetarian feast, though the fisherfolk community cooks a variety of fish and prawn curries for their Kotha Panduga as they treat fish as a yield from village tanks.

Sampath Kumar Reddy Matta, assistant professor in the Telugu department at the Government Degree College for Women in Karimnagar, says, “One of the reasons why most of the dishes are vegetarian is that farmers use only produce they have cultivated. Other reasons could be the influence of different reformist traditions and vegetarian cultures like Jainism that flourished in these parts.” Jainism was prevalent in many parts of what is now Telangana before the fourth century.

Sampath, who specialises in literature that deals with regional folk and food cultures, adds that Kotha Panduga has its historical roots in indigenous production culture, and the festival holds special significance for Adivasi farming communities.

According to him, the Kotha Panduga observed by the production communities in northern Telangana bear similarities with the different Kotha Panduga celebrations by Adivasi communities. For the Adivasis, this festival isn’t confined to just grains. A celebration is held during the harvest of every major crop, be it maize, millets, and even mangoes.

Unlike other harvest festivals celebrated across the country, for Kotha Panduga there is no specific day or time when it is celebrated. It all depends on when the harvest comes in. Earlier, the festival was commemorated after grinding newly reaped paddy at home in a manual stone grinder but now the rice is processed in a rice mill after which the festival is celebrated. The first few bags of rice that are produced are kept aside for the festival and given to family members.

Kotha Panduga for the farmers of Telangana, many of whom are poor, is a way to give thanks to nature, for providing food and sustaining the communities. The festival is underlined by the proverb, ‘We reap as we sow’, and by sharing the first produce of the harvest with family and friends. Through this, the farming community hopes to gain goodness in their lives. #HydTravel #hydnews