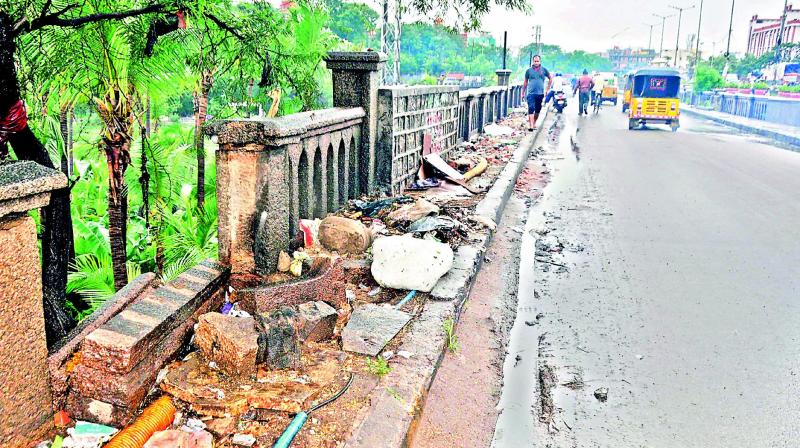 The sheer neglected historic bridge is named as ‘Muslim Yaar Jung Pul’ which is oldest in all bridges in Hyderabad.

The Musallam Jung Pul (Muslim Yaar Jung Pul) is in a dilapidated condition due to negligence by officials. Many of its stone grills (side walls) are broken; the bridge is damaged at several places. Unwanted plantlets were grown on it. Heritage activists alleges that civic authorities have failed to pay heed to save it.

The bridge was built by the sixth Nizam Mir Mahboob Ali Khan in 1893 to connect the city with the periphery. The construction of the bridge was completed in four years and it was thrown open to the public. The structure was damaged in the 1908 floods but rebuilt later.

Historians say that the bridge was necessitated after the Puranapul Bridge and Afzalgunj Bridge to cater to the connectivity needs of the people of the south with the new settlements that were coming up in the north.

The Musallam Jung Pul is one among the oldest bridges of Hyderabad completing 100 years. However, it is totally neglected; no maintenance was done for years. The bridge is one of the oldest monuments and landmarks in the city.

It was constructed in 1893 by the VI Nizam Mir Mahboob Ali Khan and later re-built after the 1908 Musi floods. The bridge is completely surrounded with debris; some of its stone grills are missing. The plantlets have been damaging the structure; cracks have developed on many arches.

The INTACH (Indian National Trust for Art and Cultural Heritage) Hyderabad chapter convener Anuradha Reddy said the bridge is one of the oldest such structures in the city; it has to be maintained by the concerned department. “Both the bridges, including the Mussallam Jung Pul, and new parallel bridge constructed close to the old one, have to be maintained by them. Neglecting these historical structures is equal to neglecting the history of Hyderabad. Musallam Jung Pul must be protected and restored to its past condition,” she added.

She said that everything associated with history and archaeology must be protected and restored intact for future generations. We can have a bright future and developed cities without damaging our history, she pointed out. Social activist Mohammed Habeeb said,”The structure has been facing apathy of officials for a long time.

After the parallel bridge was constructed at a cost of Rs 11 crore years back. The older one was forgotten by officials. It is still being neglected. Most railings are broken at many places on the stretch; many went missing; this heritage structure lies in neglect.”

The bridge maintenance is responsibility of the GHMC; no proper care is being taken for its protection. Civic authorities have taken up other development activities but failed to keep the Muslim Jung bridge intact and well maintained.